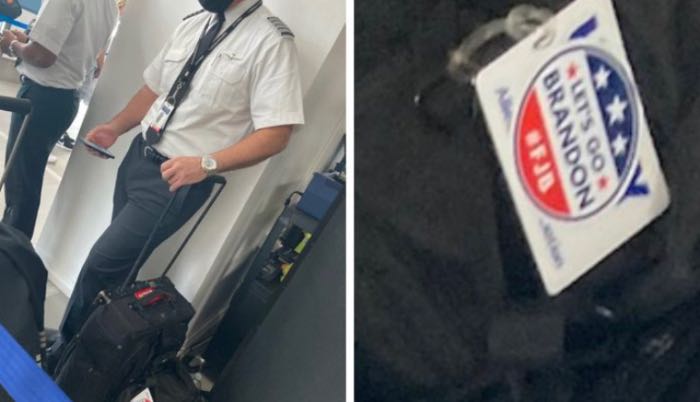 A female Twitter user, Dana Finley Morrison, called out an unidentified American Airlines pilot for having a “Let’s Go Brandon” sticker on his luggage on Jan. 8. “Let’s Go Brandon” is a Republican catch phrase for “F*ck Joe Biden.”

American Airlines publicly responded to Morrison with thanks: “Thank you for bringing this to our attention and we want to get this to the right team,” notes The Daily Beast.

American Airlines told Morrison privately in a direct message it was investigating: “We take this very seriously and have sent this over to crew leadership… They will handle this internally after review. We assure you appropriate internal review will occur.”

However, Morrison was attacked and harassed on Twitter for daring to speak up:

Why do you feel that you are entitled to American Airlines policy regarding this matter. This button has clearly hurt your very fragile feelings. You have made a very awkward report of your hurt feelings to their employer and now it’s time to move on.

This is the Karen who reported an American Airlines pilot for having a Let’s go Brandon sticker on his brief case …. May she get the proper attention for such petty BS pic.twitter.com/VfhilQWUXM

RANDOM WOMAN "rats" on American Airlines pilot for having a "let's go Brandon" sticker on his BAG. The Airline sides with RANDOM WOMAN and tries to throw the Pilot down the EMERGENCY SLIDE. BTW–this RANDOM WOMAN (Ms Morrison) is a Total NUT JOB. MIND UR OWN BUSINESS TOOTS! pic.twitter.com/cvrvNyyR8L

@danacfinley Good thing none of your “American” jets were parked on the streets of any of these “American” cities that were ravaged by BLM in 2020. Now American Airlines is allowing BLM pins on personnel. Cities burned by LGB = 0. Your SnowFlake arguments & are kindergarten like. pic.twitter.com/JMzjVseZmf

Candace Owens Brags About Her Family Never Getting Vaccinated for COVID, She Has Long History of Spreading COVID Misinformation