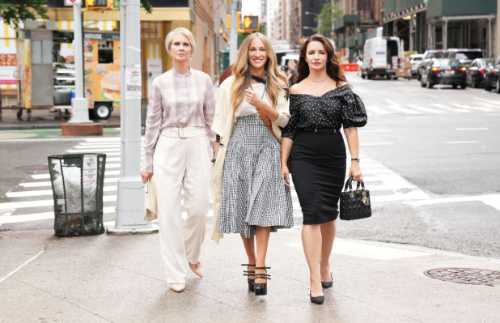 It’s strange without Samantha. It’s lacking, visually. I loved this show when it originally aired so I’m curious to see how they will contitthis story. I was and still am a huge fan of the first film. I do pretend that the sequel didn’t occur lol.

No Samantha? No thank you. #Bullies

They think we’re gonna watch with out Samantha Jones? pic.twitter.com/TH4Mn3d4Go

Ain’t nobody watching this without Samantha

Some fans didn’t care that Catrall was left behind.

Y’all lost ? Samantha or the actress that plays her HATES Sara Jessica Parker. They got major beef.

Kim katrall has talked poorly about SJP in the press saying they weee never close and we’re never friends and talked badly of the show, so she’s not involved in this.

It’s weird without Samantha but she had become such a cartoon character that after the meltdown after she dropped her purse in Abu Dhabi there was nowhere else for her character to go. She’s not needed.