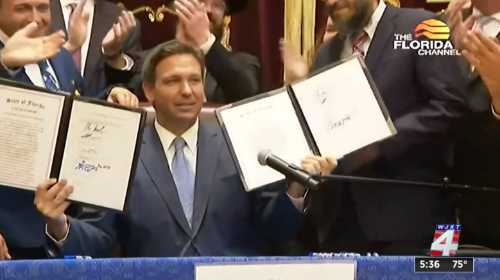 DeSantis signed the bill behind a placard that read “protect religious liberty.”

DeSantis made the false claim that God had somehow been kicked out of public schools: “The idea that you can just push God out of every institution and be successful, I’m sorry, our Founding Fathers did not believe that”.

Students are already allowed to pray in schools, per the U.S. Supreme Court, but DeSantis falsely claimed his bill would allow students to “reflect and be able to pray as they see fit.”

Lt. Gov. Jeanette Nunez also repeated the same lie by claiming the bill will “allow for religious freedom and allow for students to have a minute or two at the start of their day.”

The Florida Humanist Association noted on Facebook that the bill’s sponsor, State Rep. Randy Fine, repeated the same lie while admitting his bill is about government-sponsored religion.