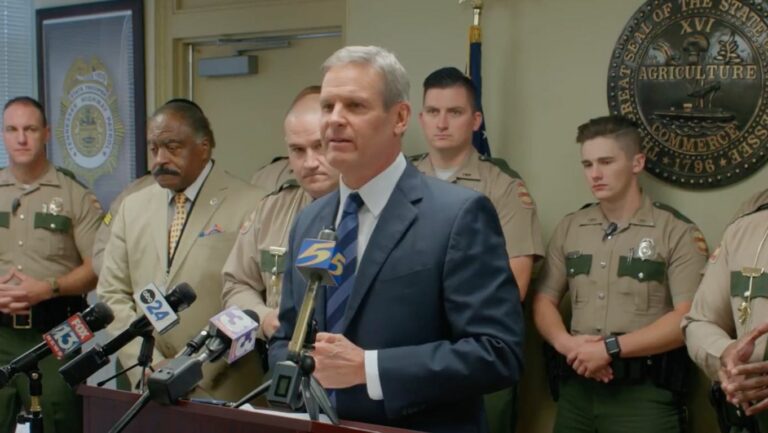 Several Tennessee Republicans, including Gov. Bill Lee (pictured above), are openly opposing healthcare for transgender children by the Vanderbilt Pediatric Transgender Clinic based on online smears by anti-LGBT activist Matt Walsh, who has led online attacks against children’s hospitals, which have led to threats, noted The Washington Post.

The AMA has cautioned states against banning gender-affirming procedures involving minors, saying: “We believe this legislation represents a dangerous governmental intrusion into the practice of medicine and will be detrimental to the health of transgender children across the country.”

Despite the science that supports transgender care, several Tennessee Republicans sided with Walsh and against medical care on Twitter:

The disturbing news revealed by @MattWalshBlog is a disgrace to the great state of Tennessee and a direct threat to our vulnerable children. I support @GovBillLee’s investigation into an institution that’s admittedly profiting from mutilating children.https://t.co/8znfTtbj5D

We will not stand by and allow our children to be taken advantage of.

I’m proud to stand alongside @MattWalshBlog and @WilliamLamberth to hold VUMC accountable. https://t.co/fp2U7rBW6Q

Proud of @WilliamLamberth @SenJohnson for taking the lead on putting an end to VUMC’s barbaric practices. I will support this important work in the State House and defend the children of Tennessee. https://t.co/JIRW9voNiq

Republican Tennessee Gov. Bill Lee, Sen. Marsha Blackburn, R-Tenn., and others called for an investigation after a Tuesday report from Walsh claimed that VUMC “drugs, chemically castrates and performs double mastectomies on minors.”

…”The ‘pediatric transgender clinic’ at Vanderbilt University Medical Center [VUMC] raises serious moral, ethical and legal concerns,” Lee said in a statement to Fox News Digital. “We should not allow permanent, life-altering decisions that hurt children or policies that suppress religious liberties, all for the purpose of financial gain. We have to protect Tennessee children, and this warrants a thorough investigation.”

…Tennessee state Rep. William Lamberth joined Lee and Blackburn in condemning the University on Wednesday, saying he hopes to go beyond just an investigation. “I’m deeply troubled by what Matt Walsh uncovered about the Pediatric Transgender Clinic at VUMC,” Lamberth said. “Gov. Bill Lee is right to call for an investigation, and we will support that investigation 100%. This type of child mutilation should be illegal and soon will be in TN.”

Walsh posted a series of tweets that were inflammatory and contained unproven claims on Sept. 20.

Walsh claimed that Vanderbilt performs “chemical castration,” which is not mentioned on an archived screenshot posted by Walsh.

But they must have forgot to delete a video from Vanderbilt Psychiatry’s Youtube channel back in 2020 which admits explicitly that they will give and have given irreversible hormone drugs to children as young as 13. pic.twitter.com/Qn48zWoJ1N

Walsh also claimed that Vanderbilt will perform top surgeries after they have “drugged and sterilized the kids,” which is never mentioned in the video posted by Walsh.

After they have drugged and sterilized the kids, Vanderbilt — as explained in this video presentation by plastic surgeon Julien Winocour and Physician’s Assistant Shalyn Vanderbloemen — will happily perform double mastectomies on adolescent girls. pic.twitter.com/SRvtytflsk

Walsh falsely claimed Vanderbilt “threatened any staff members who objected, and enlisted a gang of trans activists to act as surveillance in order to force compliance.”

So, let’s review. Vanderbilt got into the gender transition game admittedly in large part because it is very financially profitable. They then threatened any staff members who objected, and enlisted a gang of trans activists to act as surveillance in order to force compliance.

VUMC requires parental consent to treat a minor patient who is to be seen for issues related to transgender care and never refuses parental involvement in the care of transgender youth who are under age 18,” the statement read. “Our policies allow employees to decline to participate in care they find morally objectionable and do not permit discrimination against employees who choose to do so. This includes employees whose personal or religious beliefs do not support gender-affirming care for transgender persons.“